This paper and ribbon is offered as a freebie along with some other jeweled toned papers. Arty Chelsea in in the 50's was my inspiration. 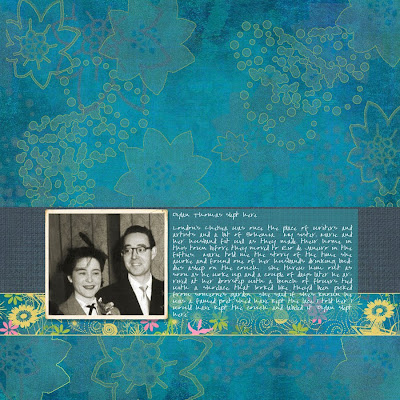 London's Chelsea was once the place of writers and artists and a bit of Bohemia. My sister, Marie and her husband fit well as they made their home here before they moved to Rio de Janeiro in the fifties. Marie told me a story of the time she woke up one morning after Bill, her husband, had left for work and discovered one of his drinking buddies asleep on the couch. When he got up he wanted to make conversation, but being pretty upset with Bill, she made him leave. A few days later he arrived at her doorstep with a bunch of flowers that looked like they'd been picked from someone's garden, and they were tied with a shoelace. She said if she's known he was the famed poet, she'd have kept the lace, I told her I would have kept the couch and labeled it "Dylan slept here"


Sorry, the Digital Paper Freebies are no longer available.
~~ chris
Posted by Chris at 11:32 PM

Pretty!
That is cool!

I do love the way you tell stories. Keep up the good work!