Bringing out all the old Valentine's cards stirred up my interest in all my other cards I had stored in boxes.  There's one box filled with old cards and letters given to me by family, that were in an old trunk in the garage for about thirty years.  I brought them in the house a couple of years ago because they were smelling a bit musty, and since then I've tried everything to get rid of that smell with no luck.  I thought they would have to be thrown but held them in the box until some new remedy was invented.

I remembered the handful of vintage cards I'd bought a number of years ago that had the odor but after displaying them for a while it was gone, so I thought it would do no harm trying this out on the Valentine's cards for a while.  Not only did they look pretty, but I'm dead chuffed to have the mustiness all gone!  I've decided to leave them displayed in my work room along with all the other "musty" cards for a while longer.

I'm going to use my conchos and ribbon to hold the prettiest of the cards, and set the others up high on the cabinets. 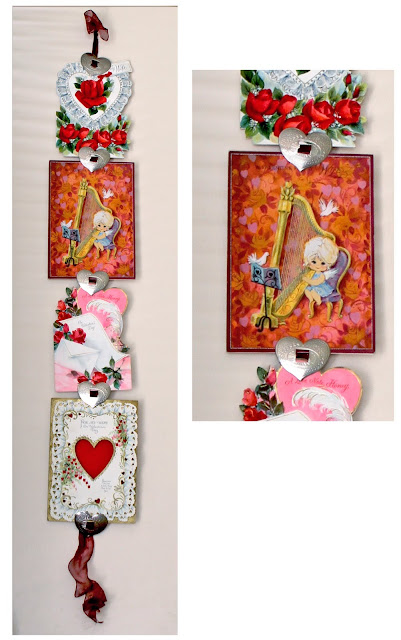 Nice! do you have a wall that has free space to hang a line across it? Then you could pin them up on it.

Hi Chris, Thanks for your comment on my French post. I still don't know what it says :).
I just looked at your other blog. I know you haven't posted there in awhile, but those photos are just gorgeous. I'll have to look at more.
Have a great day!
~ Julie