I just had to get rid of my "Blob" picture sitting front and center of this blog. I do have some freebies coming up but am still looking for another place to upload them. I was playing with circles and had a lot of fun blending with some older flower photos. I think some of the designs are a bit too much for a full scrapbook page, but as borders or strips, they're pretty.

The papers I designed way back when, are still being worked on.  After a real close-up look at the design, I couldn't let them go with all the messed up pixels underneath the top surface.  Careless blending in Photoshop will do this, and I'm very guilty of getting carried away with all the lovely colors and textures I see on the  upper surface.

I've been out of sorts for many months with my eyes.  Even now I can only see by closing my left eye and squinting, so anything I design these days is a bit iffy, unless everyone else squints like me to view what I've done!  I had a detached retina, and after the surgery to fix it, I now have cataracts - very bad in the left eye, but I can see enough to get around a bit - no driving though.
We bought a 27 inch iMac to replace our 24 inch that crashed, but everything is twice as small instead of larger. The magnifying feature brings things closer and larger, but it gets pretty bad for moving around the page. I think I prefer my older mac - except for the lack of memory that's needed for working in Photoshop. Let's hope this typing doesn't end up gobbledygook! I'll edit it later with better eyes.
Oh, I was getting bored and decided to play around with our 24 inch crashed iMac.  After several weeks of Googling and trying out a variety of things, I got it up and working!  It wasn't the hard drive after all, so I ordered more memory so it won't crash again for a while (I put the memory and special screwdriver somewhere and with limited eyesight, can't find it).
I think I'll dedicate one of these machines to my favorite Brit TV programs that I watch from YouTube.  I'll be able to relax downstairs in my living room on my comfy Bohemian Frump couch, with a nice cup of tea.  The couch has tassel — type fringe all around the bottom now — they omitted it from my order by mistake, but sent me heaps after I told them.  With fabric glue, it wasn't  difficult to glue on. I put the green trees on our deck - they make a great privacy screen! 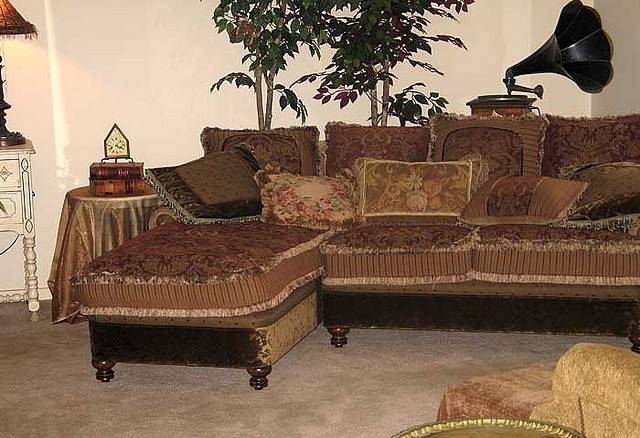 is that your living room? cool!!